A 3D HD View Inside Your Body

The kidneys filter the blood to produce urine, which passes through the renal pelvis, a funnel shaped area on each kidney, to tubes called ureters that lead to the bladder. A blockage can sometimes occur at the junction of the renal pelvis and the ureter called the uretero-pelvic junction (UPJ), causing urine to accumulate and damage the kidney. This condition can occur due to an abnormally developed UPJ, the presence of kidney stones, scar formation, infection, back flow of urine (vesico-ureteral reflux) or a vessel that compresses the area.

Pyeloplasty is a surgical procedure to remove the area of blockage at the UPJ. It is traditionally performed through open surgery, but a more advanced minimally invasive approach with robotic assistance allows increased precision and a faster recovery.

During the procedure, you will lie on your side. Three to four small skin incisions are made over the affected kidney. A laparoscope (long lighted fibre-optic tube with a camera) and surgical instruments held by robotic arms are inserted. A 3D imaging system provides an enlarged and clear vision of the operating site on a monitor for your surgeon. The arms of the robot are controlled by your surgeon who sits remote from you, at a console. Movements made by your surgeon are translated into movements by the robotic arms as the surgery is performed. This improves manoeuvrability and precision.

Robotic-assisted pyeloplasty benefits include its precision, shorter operating time and hospital stay, smaller incisions with minimal scar formation, and a faster recovery and early return to your daily activities. However, as with any surgery, it may be associated with complications such as bleeding and infection. 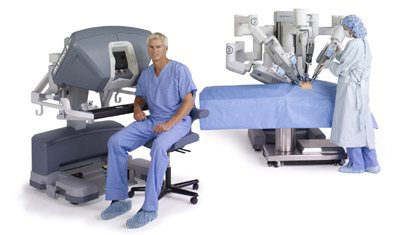